MassBike staff and members will participate in the annual National Bike Summit to speak up for better bicycling conditions and more livable communities. As leaders in America's growing bicycling movement, we feel it's important to represent Landry's customers' concerns about bicycling accommodation and safety with our elected officials and policy makers.

The National Bike Summit features an engaging bike-advocacy conference and a full day of Congressional meetings with U.S. House and Senate representatives — to discuss and advance future transportation funding for bicycling infrastructure and programs.

The National Bike Summit is organized and hosted by our friends at the League of American Bicyclists. MassBike coordinates our local Massachusetts delegation for this event.

Watch this video to see what happens at the National Bike Summit. (Produced by the League of American Bicyclists.) 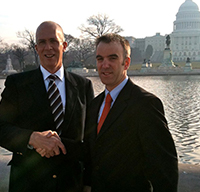 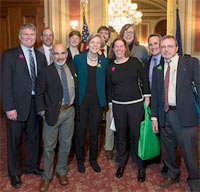 The theme of this year's National Bike Summit is Safer Streets for Everyone, focused on activating and elevating leaders from all areas of the Bicycling Movement.

Help the cause for better bicycling

We realize that everyone who cares about cycling can't attend the National Bike Summit in Washington, D.C. But you can still get involved to make bicycling better for the common good. Here are some easy suggestions: